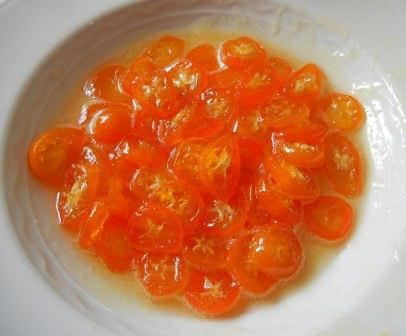 Why did I share this recipe? Candied Kumquats aren’t something the average person bothers with….

Well… I’m in the produce section of the grocery store the other day, and there were these boxes of little orange, olive shaped things. KUMQUATS! I’ve never seen them in a little plastic box at the grocery store before. In my experience, Kumquats live on trees, and stay there (at least until a couple of kids come along and start a Kumquat war… then the tree becomes the Ammo Station). You see, (and yes, I know some of you already know this… this is for the benefit of that new guy in the back) I grew up in Southern California surrounded by Citrus. My dad was a wholesale nurseryman, so our world was filled with Oranges, Lemons, Limes, Tangerines, and even Kumquats….. but…. what good was a Kumquat? Ever seen them? They look like mini oblong orange things. Sort of the Christmas Decoration of the Citrus World. The Nursery grew them, because the plants were popular during the Chinese New Year, since they were considered “Lucky”…. I wasn’t sure what to think of a fruit that was pretty much all peel. (I’m the kind of person who strips every last smidgen of the peel and pith off of my oranges).

But there they were in the store… Kumquats.. and, I decided to take on the challenge. I bought a couple boxes, and spent the day in the kitchen… the result? A whole lot of flavor, and a few new recipes.

So, with this Candied Kumquats recipe, I hope to answer the age old question, “What the heck can you do with a Kumquat?”

Turns out, making Candied Kumquats is super easy, and they are amazingly delicious. Tart, sweet, and such a pretty orange color.
I’ll start with this basic recipe… then I’ll follow up with more treats that you can create using this basic Candied Kumquat recipe.

by Angry Baker Staff
Candying Kumquats is fairly easy... the trickiest bit is getting the seeds out (it's a bit fiddly, but not that difficult). This basic recipe makes around 1 cup of Candied Kumquats.... you can double it, but you'll have to play with the timing, just add a few minutes to each step. The Kumquats themselves are yummy, and can be used in any number of recipes like scones or tarts (or just spoon them over vanilla ice cream, yogurt or pudding). Jazz up a purchased cheesecake by spooning Candied Kumquats over the top. Your guests will be impressed! If you find yourself with extra syrup... grab a straw! (kidding.... For those of you with bartending skills, you can make some wonderful citrus flavored drinks.)
Persons
1
Prep Time
10 minutes 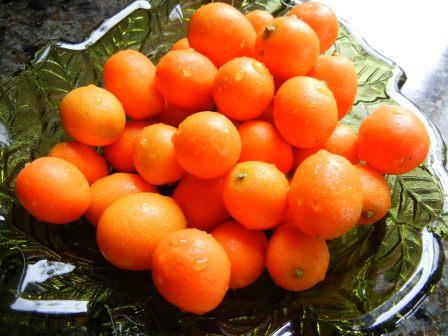 According to my interpretation of the Department of Agriculture site, Kumquats which are native to China, are a slow growing, thorny, evergreen shrub that bears olive shaped orange citrus fruits.

Supposedly, you can eat them raw… but… well… I’ve never tried them that way. They are preserved as marmalade, or candied for dessert and other cooking.

They are a pretty plant, since they are green year round. The fruit is ripe in January/ February, so, it brightens up winter. Kumquats are small enough to be grown indoors. Hee Hee… if you keep your Kumquat Plant near the sofa, you can have a fresh healthy snack without even getting up.

Where to Buy Kumquats 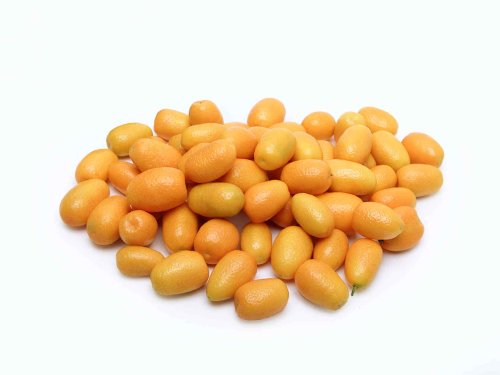 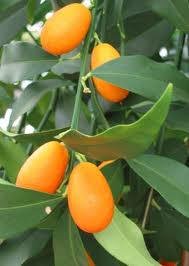 What Can I Make with Candied Kumquats?

Trim off the Stem End 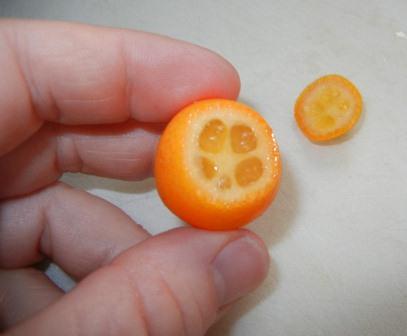 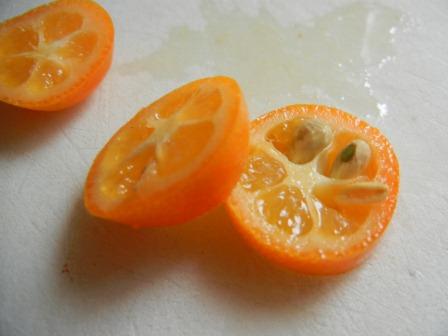 Pick Out the Seeds

Don’t Panic if Bits Slip Through 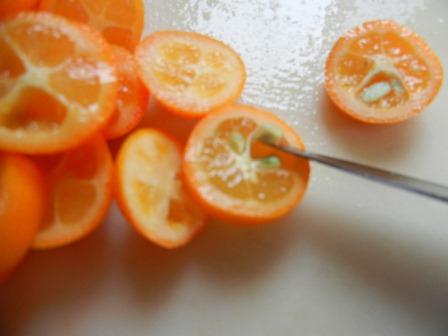 Ok, you have a little pile of Prepared Kumquats 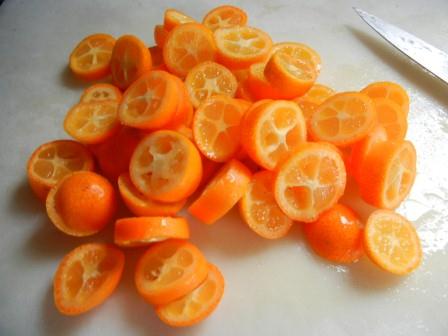 Combine the Water and Sugar in a Saucepan

Bring to a boil over Medium Heat 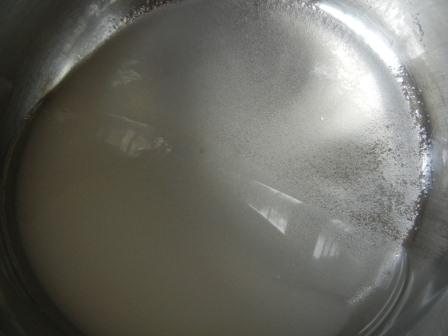 Simmer the Kumquats for 10 Minutes 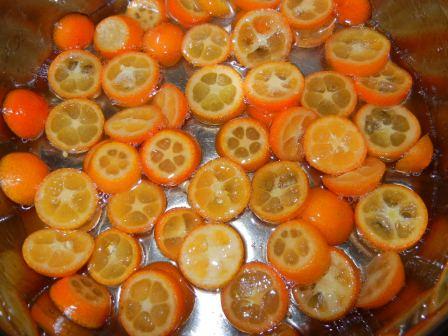 Take the Kumquats out of the Syrup

Let the Syrup Cook Down a Bit 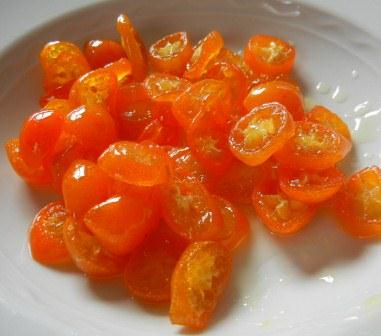 Add the Kumquats back to the Syrup